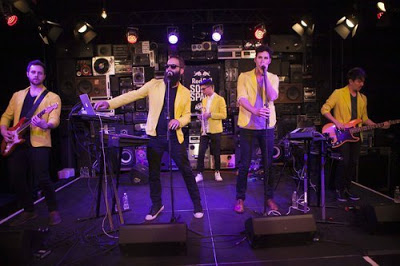 This week’s BOTW spotlight, CAPITAL CITIES, serves the indie-electro-disco realness that you have been missing in your music collection. The band’s extremely catchy and danceable debut EP probably has something to do with the two main members starting out as jingle writers. They met through Craigslist in LA in 2009 and started to build up a full live-band set up, which also includes a trumpeter!

The expertly crafted combination of smooth and melodic vocals, goovin’ bass lines, 80s-inspired synth hooks, trumpet riffs, and toe-tappin’ beats, Capital Cities could do you no wrong. They have a full LP due out this coming June, but in the meantime, check out their self-titled EP for a good dancing time. Their hit single, “Safe and Sound,” not to be mistaken by the track off the Hunger Games soundtrack, was released in 2011 and is just now starting to get radio play on alt-rock stations. I would not be surprised if this band blew up sometime soon!

If this song doesn’t get stuck in your head or make you want to fist pump in the car, I do not know what to say…

There’s also a million remixes of “Safe and Sound” on Spotify, check itttt.

Other bands that might play in the same festival lineup with Capital Cities…
1. Phoenix
2. Imagine Dragons
3. Empire of the Sun
4. Walk the Moon
5. Two Door Cinema Club
6. Daft Punk
7. Young the Giant

Until next time music enthusiasts.