Relive the 3 day extravaganza that was Bumbershoot 2013! Check out my highlights from the festival (click band/artist names for more music)!

Growing up, my mom would always play Heart at home and in the car. I was BEYOND excited to watch these rock legends tear up the stage and they surpassed my very high expectations by far. All other bands that exist in this world need to take note, because Ann (63) and Nancy (59) Wilson prove that, like wine, their talent only got better with age. There is no band that could ever top that live performance. Watching these sisters made me a bit worried for the rock n’ roll scene of today, you youngsters better step up your game! Heart was definitely the highlight of my Bumbershoot 2013 experience.

ZZ Ward
I’ve been following this chick since she released her first EP and I couldn’t wait to finally catch her live! She brought a very soul-filled and high energy set, complete with riffs to die for, a killer band (props to guitarist especially, he SHREDDED), and live renditions of her debut album that are arguably better than the studio recordings!

Watsky
This San Franciscan rapper is probably one of my favorite discoveries at Bumbershoot this year! His rhymes are so fast, I would dare say they are nearly comparable to Busta Rhymes. His hooks were catchy, and it is always great to see a live band behind a rapper.

Robert Glasper Experiment
This Grammy Award-Winning Jazz musician is the epitome of the great talent Bumbershoot goers are fortunate enough to see. The band’s chord progressions and complex rhythms leave you in awe, but you can’t help but dance along because the groove is too good! My favorite moment had to be when they covered “Get Lucky” by Daft Punk and all of a sudden a huge rush of people join the crowd… noobs probably thought it was Daft Punk, haha!

!!! (Chk Chk Chk)
Lead of singer of !!! wins the best dance moves at Bumbershoot, HANDS DOWN. The band’s upbeat electronic tunes were perfect fuel for his giggin’, woppin’, twerkin’, and whatever else he was attempting to do up there!

Kendrick Lamar
What is a 2013 music festival without this guy? (Seriously, he’s at like every festival this year!) Kendrick played the main stage and definitely did not disappoint. I’m not familiar with all of his material, but he definitely had me and the crowd bobbing our heads! Props to his killer band, too!

Tegan & Sara
This super-sister-twin-rock duo have been one of my favorite bands since… forever! The last time I saw them was in 2005 at The End’s Endfest, so I was especially pumped! T&S’s vocal harmonies and perfect blend is unmatched and their musicianship is just so admirable. Definitely one of my favorite sets of the festival! 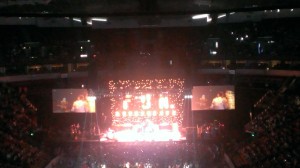 Having seen the guys just a few months ago (and having experienced a phenomenal performance), I KNEW it was going to be a SUPER FUN time! The band was as tight as ever and Nate’s vocal chops are CRAY CRAY. Not many, if any, guys in the rock genre these days can sing and belt like that for an entire set, let alone every night on a North American tour. (And let’s not forget his AMAZING range!) A+ set, as always!

Matt & Kim
This boy-girl duo/couple are probably the cutest things you will ever see. Their performance was high-energy, crowd-surfable, and even included gangster rap dance breaks. The combo of Matt rocking the keyboards and vocals, while Kim is playing the crap out of her drums (and jumping/dancing on top of her bass drum) is undoubtedly a live show that you cannot miss!

Vintage Trouble
This soul/r&b group was such a delight! The lead singer brought back old school vibes of Marvin Gaye and Sam Cooke, and he had the dance moves to go along with it. The band got everyone in the crowd on their feet, dancing, and clapping along. Just a feel-good time!

Hometown hero, Allen Stone, delivered a stellar show, per usual! I’m not at all surprised how well he performed (probably because he’s uber talented.. AND it was my 5th time seeing him and the fellas haha), and I am so glad Seattleites came out to show the love! Allen is today’s poster indie-soul-man and he is SLAYING IT. He improves every time I see him live and that range just keeps getting higher and higher! If you haven’t already, GO SEE THIS DUDE LIVE. He will be your new artist crush, guaranteed.

Kinky
To put a genre label on this band would be an impossible task. Kinky is Latin-hiphop-rock-salsa-electonica-dupstep-pop ALL IN ONE! They are basically the PERFECT band for a music festival, everyone was dancing to their hearts content!

MGMT
Going against the popular opinion of the day, I thought MGMT put on a GREAT show! Their music is artful, interesting, and their earlier songs (Electric Feel, Kids, Time to Pretend, etc.) are definitely alt-rock essentials. I think they lost the crowd’s attention because of their newer, more experimental songs. But even then, it was like watching art-work come to life with the crazy visuals on the screen! Don’t get me know wrong, I have nothing against alt-J (though their set became very monotonous for me), but I personally think MGMT did live up to my expectations!

Bassnectar
Since my hearing is already so damaged from 14 years of concerts, band practices, and drumline rehearsals, I thought, why not add to the damage and jam out with Bassnectar? That is exactly what we did, for about 10 minutes! My first EDM experience was pretty awesome, however, I was more than fatigued from the 3 day extravaganza and was ready to hit the sack! Nonetheless, Bassnectar definitely brought a party with him!

Next time, don’t miss out on:
Starbucks Gold Member Lounge – Flash your Starbucks gold card at the entrance and you will receive a badge that will grant you free unlimited 12oz sbux drinks ALL BUMBERSHOOT WEEKEND!
Free Stuff – Free bandanas/totes/sunglasses/etc.from sponsors every year, food samples, beverages, and tons of other booths!
Poster & Photo Exhibits – super rad art, posters, prints, and photos from locals and artists around the world!

Hope you all survived PFD (Post Festival Depression) today, it was for sure a Bumbershoot experience for the books! Can’t wait to see next year’s lineup!