The other day I was shopping for a new pair of pants on Amazon, Frank and Oak, and Bonobos. As I clicked through link after link, hunting for something elegant yet durable (I only buy used jeans at thrift stores, as they are so comfortably, beautifully worn), a horrible realization dawned on me: despite my pretense of being at least somewhat stylish, I hadn’t the least idea of how to differentiate between khakis and chinos.

Consequently, I decided to do a little research, emphasis on the adjective, beginning with the background of both types of pants. As I discovered, khakis and chinos are inextricably intertwined in history, running as parallel as the creases on corduroy.

According to Mr. Porter and Historical Boys’ Clothing, khakis originated when the British army transitioned from scarlet and white uniforms to the stony, dusty khaki uniform, the better to blend into mountainous, desert regions. Given its cheapness, heat tolerance, and durability, the uniforms were made from cotton. And thus the official khaki was born, the word khaki coming from the Urdu word for dust.

But what about chinos? Chino is a Spanish term for Chinese (confirmed), and once the U.S. acquired the Philippines in the Spanish-American War in the 1890s, China became a major manufacturer of trousers for American troops stationed in the eastern theater. And the name chino gradually came to refer to the tapered pants American troops would tuck into their boots.

Of course, chinos were directly descended from khakis, as they were of similar color and fabric (given that cotton’s properties rendered it useful in tropical climates). And although they were more of a military garb at that time, the World in the world wars eventually made the sight of khaki uniforms and trousers familiar to everyone. ManToMeasure posits that the G.I. Bill was responsible for spreading khakis and chinos in American universities, which then spread into the American way of life, which eventually became substantially influential around the world.

Which leads us to present day, wherein chinos and khakis are sold and classified distinctly. What happened in between?

Well, those original khakis were made from cotton twill, with criss-crossing ridges woven together. No pleat, no fancy ornamentation, merely flat-fronted or tapered pants with a few functional pockets. And chinos were khakis in all but name, originally. However, as time has gone on, ManToMeasure states that chinos are more comfortable and possess fewer pockets than khakis. There is no data in that source to back this up, so I delved into the depths of the Interwebs myself to riddle this out. 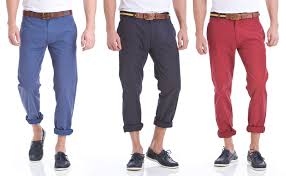 This is what I discovered: chinos are the slightly more fashionable brothers of khakis, nowadays. What has happened since the GI Bill in the 1940s and 1950s is that chinos, the less-familiar name, were seized upon as the segment of casual cotton pants that could be tinkered with, leading to more tailoring and color experimentation. Nowadays, khakis connote flat-front, un-creased, four-pocketed, light brown cotton pants.

Chinos, on the other hand, although very similar, are more likely to be classified as such when the pants are tapered, slim-fit, brightly colored, or in some other way distinguish themselves beyond the supposedly drab khakis. Hence they are supposedly somewhat more fashionable, according to AskMen.

So there you have it: they’re basically the same, historically speaking, and only differ as a marketing term or classification today. Of course, there are some who claim that chinos differ in the cut of the front, with less overlap between the fly and also fewer pockets on average, but those differences are piddling, and fall under my prior classification.