One of my favorite summer musical rendezvous strikes again! Seattle’s Alternative music station, 107.7 The End, hosts Summer Camp every year since 2011 (and 2008) at Marymoor Park with a lineup that includes bands that are up and coming (past lineups boast: fun., Neon Trees, New Politics, Awolnation, MSMR – all before they “hit it big”).

Here’s a rundown of the awesome summer day of music (sorry for the crappy Windows Phone pics, haha):

Thumpers
Sadly, we arrived right at the end of Thumpers’ set. BOO TRAFFIC. ): They’re awesome though, check out their single “Unkinder (A Tougher Love).”

Bad Suns
Starting out with Bad Suns on this beautiful summer day at Summer Camp was just great. They definitely set the mood for a great 9 hour day of music! Read up on their Band of the Week feature here.

Sir Sly
Sir Sly has been tearing up the 107.7 scene, so it only made sense that they made an appearance at Summer Camp as well. They guys had a solid set, and you could tell that they were really appreciative of the crowd, which is always nice to see!

Wild Cub
I’m obsessed with their catchy single, and it was even more awesome live. Take a listen, and you are bound to start tapping your toes.

Bear Hands
What’s up with these bear/cub band names? Haha. These guys were awesome, and had such a great crowd response! Click here for Bear Hands’ Band of the Week feature!

SKATERS
Definitely my go-to band on this lineup. SKATERS’ sound is such a perfect blend of all my favorite sub-genres of alt-rock and they put on such a fun show! Check out their previous Band of the Week feature here. 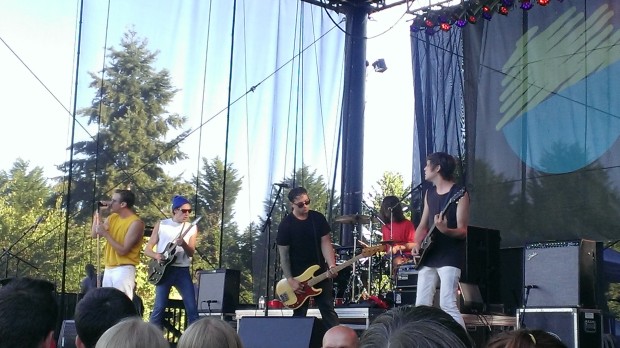 The Orwells
These guys are seriously a riot (in a good way)! I’m sure they were drunk on stage, but not to the point where they couldn’t put on a good show. They were entertaining, hilarious, and sounded great. 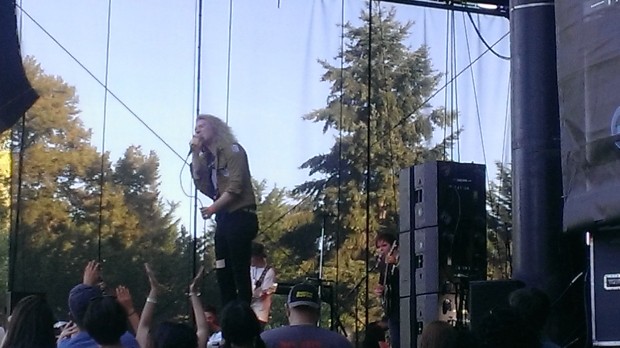 Camp Fire Sing Along AKA Surprise Set by Portugal. The Man!
Basically the best surprise ever to have Portugal. The Man come out for Summer Camp! (Even though I really wanted some kind of camp fire sing along/karaoke thing to happen!) Get more on the guys with their Band of the Week feature here.

Bleachers
Bleachers performed like pros, and were just all-around such a fun and happy time. Lead singer/guitarist/band leader, Jack Antonoff (yeah, he’s also in fun., no big deal), was such a positive spirit on stage and their new 80’s altrock-esque record translated very well live. Definitely check out “Strange Desires,” one of my favorite albums so far this year! Check out their previous Band of the Week feature here.

Phantogram
The cool alt-electronic sounds of Phantogram were a perfect way to end the summer night (Also, girl power! Sarah was the only leading lady at the entire show!). Read more on their Band of the Week feature here.

Selfies with these cool dudes! Left: Gregr from 107.7, Right: Michael Cummings of SKATERS ❤