I have to admit that my Seattle rap game was limited to Macklemore x Ryan Lewis and Blue Scholars up until I saw “The Otherside” (a documentary about Seattle’s underground/indie rap scene) just about a week ago.  The film was shown at the SIFF (Seattle International Film Festival) and is definitely one of my new favorite documentaries! Local artists took viewers through the rich history and current ever-evolving rap scene and you couldn’t help but be a proud Seattleite. Needless to say, my eyes have been opened to a new world of great music and one artist that stood out for me was GIFT UH GAB, the one female rapper highlighted as a component of Seattle’s rap scene during the film.

As soon as Gift uh Gab came on screen, she immediately caught my attention with her extreme confidence, 90s throwback inspired rap style, and effortless flow. Gift uh Gab gave me old school vibes of Queen Latifah and Salt n’ Peppa, and at the same time, the music resembles this unique/indie/laid-back “Seattle Sound” that many local artists inhabit. Her EP, “Queen La’Chiefah,” is jam packed with the most chill tracks and it is perfect for your summer car ride playlist. Records like “My Life” and “Sprinkle” will definitely have you singing along at the choruses by the second listen.
Being the social media enthusiast that I am, I went to follow her right away on Twitter after the film… and as soon as I walk out of the theater, she is right there! I got to say hi and get a picture, she was really nice and just a really down to earth chick!

I really recommend checking out her stuff and supporting the Seattle musicians!

You can follow her @Gift_uh_Gab
And get her AWESOME album here: http://1giftofgab.bandcamp.com/
Other Artists You Might Like:
1. Santo Gold
2. Frank Ocean
3. M.I.A.
4. Blue Scholars
5. Queen Latifah
<br>
<br>

Until next time, music listening friends. Peace out, Sea-Town. 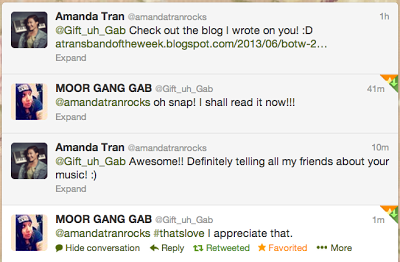